New York, NY, December, 2013: The Guardians: Hero and Superhero by Italian architect and designer Antonio Pio Saracino are two new public sculptures at gateway to Bryant Park. Hero is a Gift from the Italian Government to the U.S. and  Superhero is a Commissioned Project by Equity Office. The public art project ‘The Guardians’ is on view indefinitely in Three Bryant Park Plaza (1095 Avenue of Americas).

In early 2013, Saracino was presented with two new opportunities: to produce a symbol of Italy in New York during the Year of Italian Culture in the U.S., and to create a permanent public art project for the plaza at Three Bryant Park.

His idea, “The Guardians: Hero and Superhero,” is the answer to both. Hero is a gift from Italy to the United States, donated by the Italian Government with the support of the worldwide energy company Eni. Superhero, at 1095 Avenue of the Americas, was commissioned by the Equity Office.

“The Guardians: Hero and Superhero,” consists of two public sculptures on view indefinitely at Three Bryant Park in the middle of Midtown Manhattan. The pair of 13-foot high statues, one in marble and the other in mirror-polished stainless steel, are positioned at the north and south ends of the public plaza at Three Bryant Park between 41st and 42nd Streets. “The Guardians” represent two civic heroes, symbolizing the past and the present, and are consistent with Saracino’s overarching aim to combine digitally generated architectural compositions with a powerful, timeless message of resiliency and innovation.

Saracino’s 8,000-pound marble “Hero,” a reinterpretation of Michelangelo’s David, the defender of the city of Florence, gazes uptown from 42nd Street as a protector from the past. Its counterpart, “Superhero,” who wears a cape and symbolizes the present, watches over downtown from 41st Street. “Superhero” is made of stainless steel and weighs 15,000 pounds. Both sculptures were made in New York City.

The sculptures “Hero” and “Superhero” soar upward through a system of marble and polished stainless steel plates stacked in repeated planes, which recall the architecture of the surrounding skyscrapers and suggest the movement of the figures within their environments.

New York based curator Helen Varola states, “Together, The Guardian’s surveillance suggests a vulnerability spanning centuries, politics, and cultures, a space-time dialogue that radiates a contemporary sacra conversazione with the island of Manhattan. The stacked planar marble and stainless steel forms are layered as vertical columns to create positive/negative spaces through which we view Manhattan’s energy and architecture recalling the way Donald Judd’s Stacks evoke mystery and sensuality.”

The Ambassador of Italy to the United States, Claudio Bisogniero, states, “David: such a strong symbol of Italian cultural heritage, and now a Guardian of the friendship between our two countries. The Year of Italian Culture in the U.S. couldn’t have left a better legacy.” 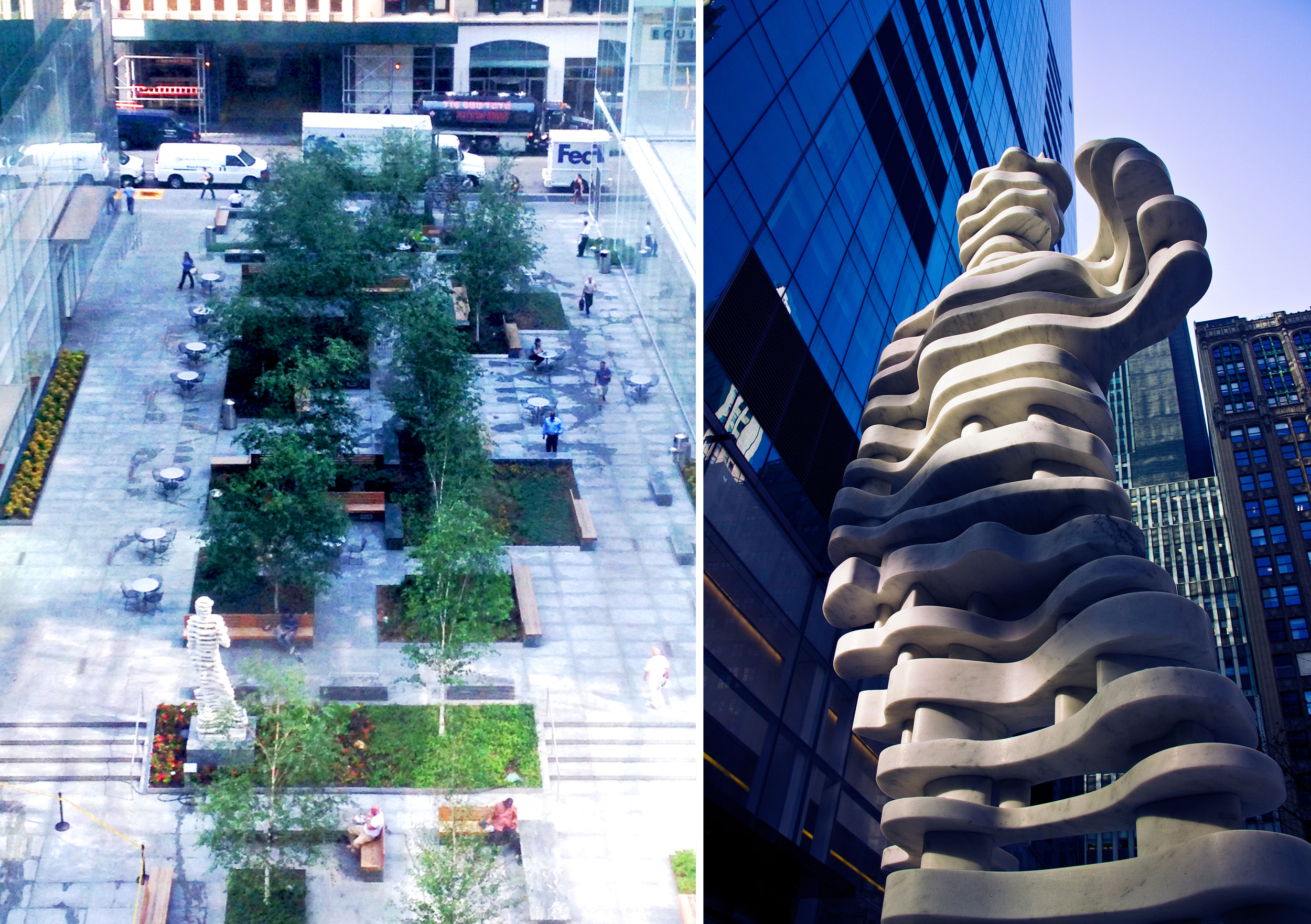 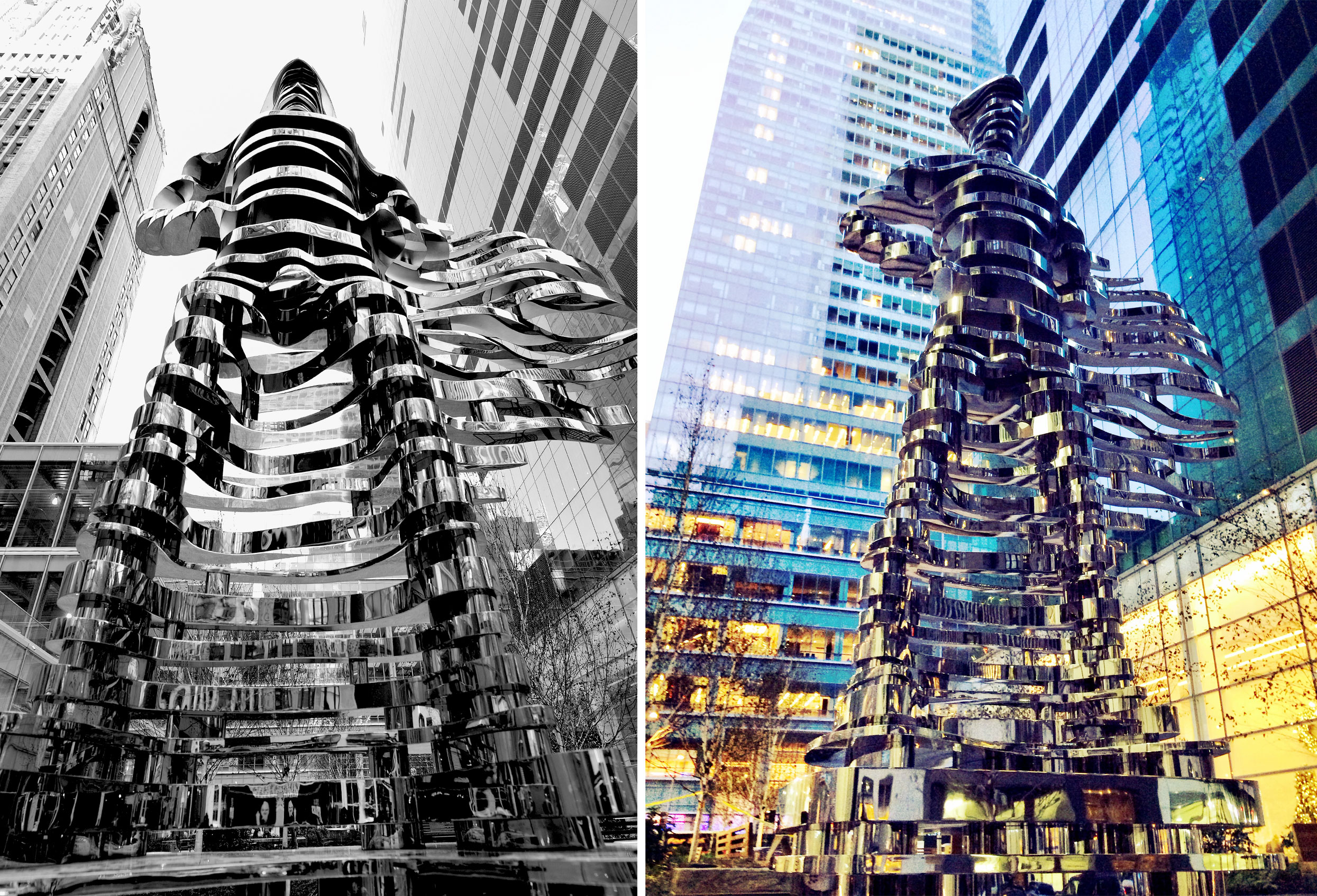 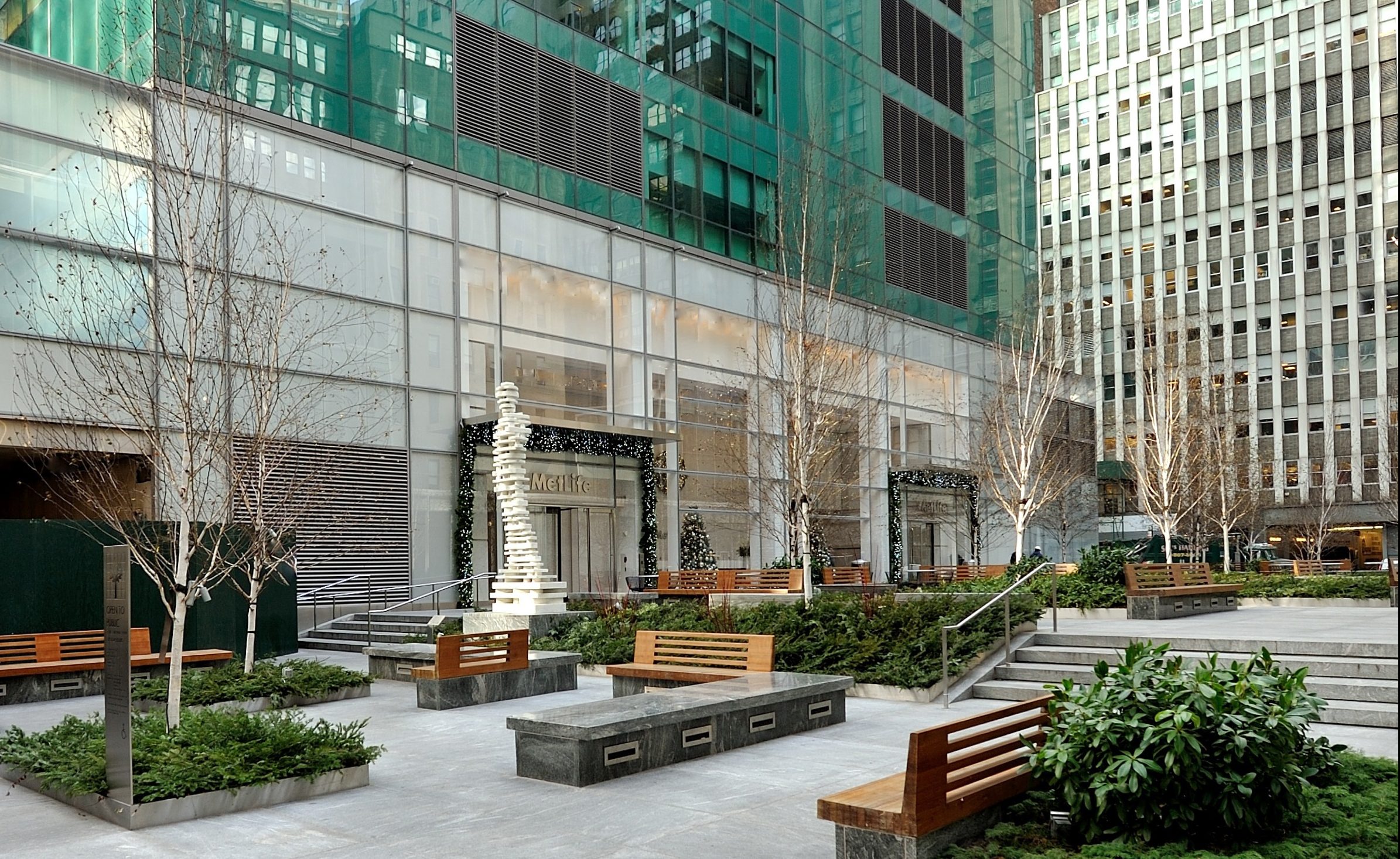 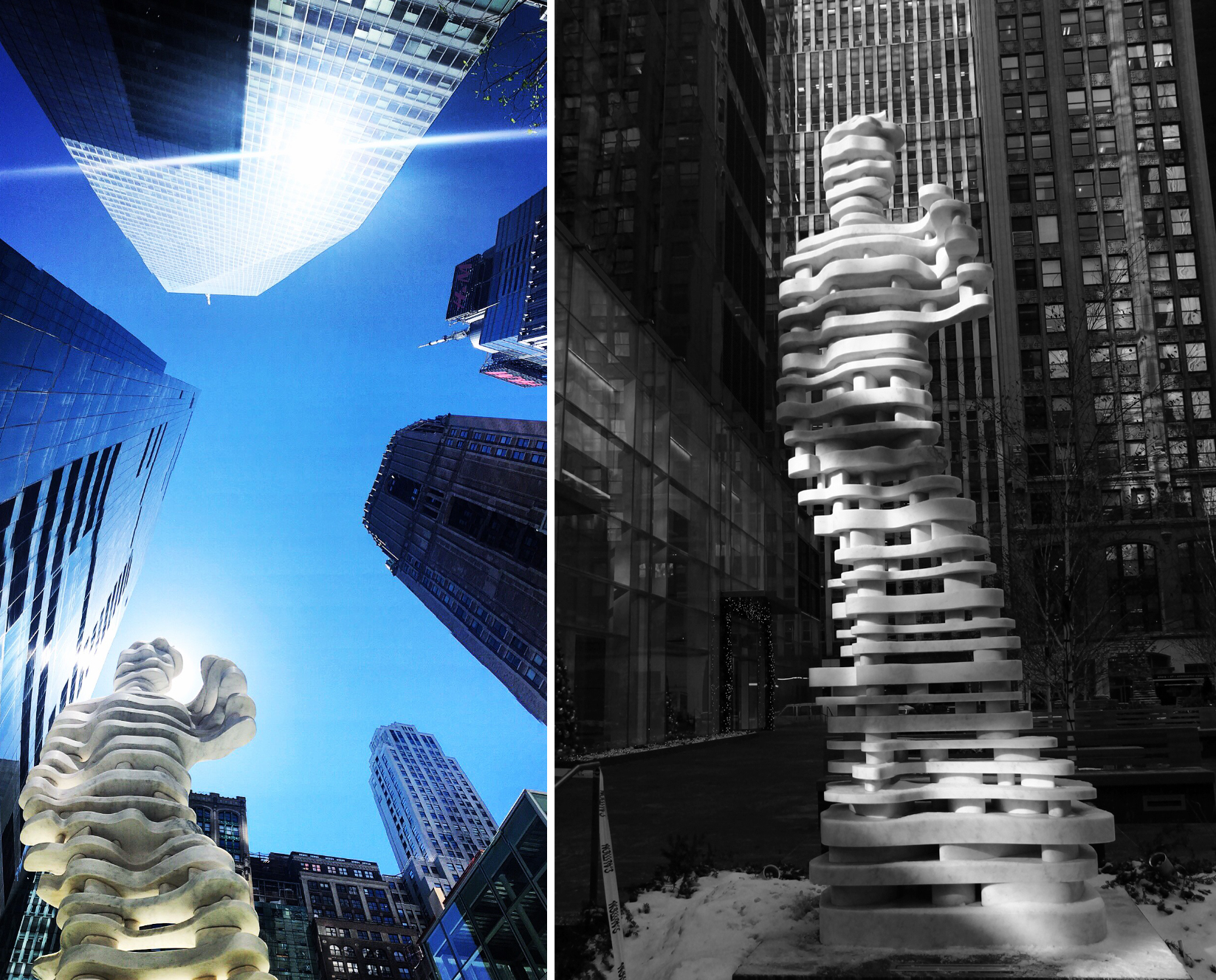 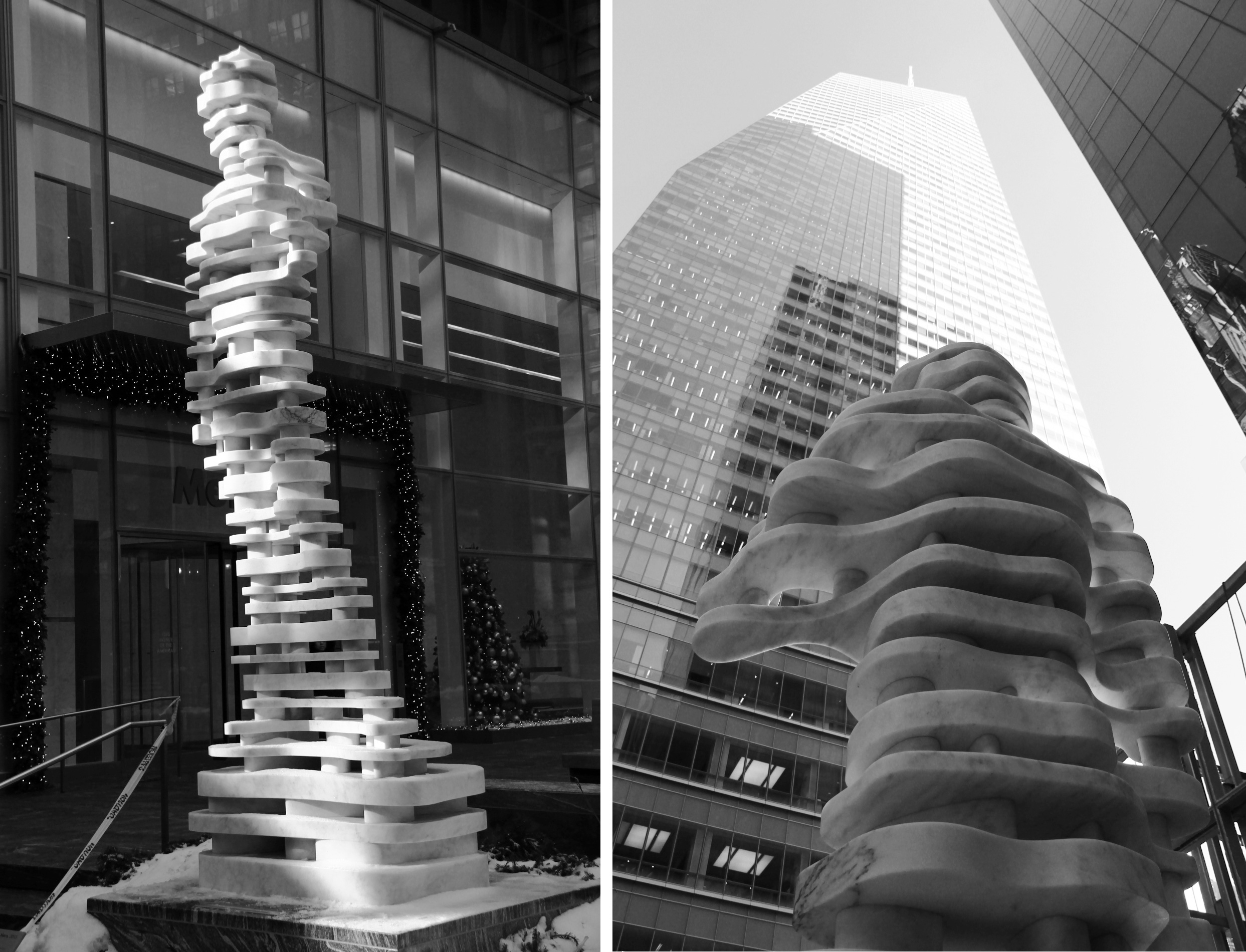